January 1st, 2018 by Tyler in Beer Reviews, Everything

Now as the calendar turns over into 2018, and people are waking up with either a hope that the year will be better, or a massive hangover, what better time to write up a review on another beer.  As most of us enjoyed the holiday season, I had the pleasure of trying several beers I have never had before, so for your reading pleasure, you will be bombarded by beer reviews.

The first of which is from Four Fathers Brewing Company, and their Starter Session IPA.  Four Fathers Brewing is based out of Rockwood Ontario, so down towards Guelph.   Looking through their website, it seems they may have moved to Hesplar Village in Cambridge, so still down in the Guelph area. 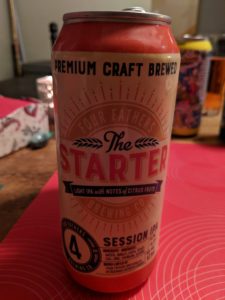 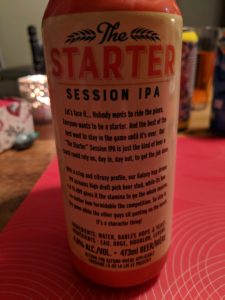 Now without further ado, the beer reviewing part.  That really didn’t roll off the tongue like it was intended to….  Anyways, as you can tell below, I had my trusty cellphone with me to take some photos, so we will use those photos as a visual aid.  Unfortunately you will have to trust me on the tasting aspect, due to the fact that there is no real way to taste the beer through a screen.  And for those who are licking their computer screen or cell phone screen in hopes that there is a taste, I’m sorry….

Appearance, well as you can tell by the below, The Starter, pours out in an almost muddied orange copper colour.  The head on the beer is a nice fluffy, bubbly white colour, which lasted a surprisingly long amount of time… well until I started drinking it… then it dissipated rather quickly.  Just overall a very appealing appearance for sure. 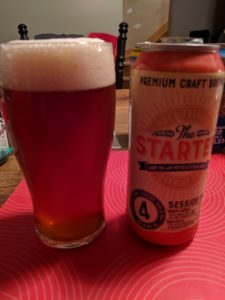 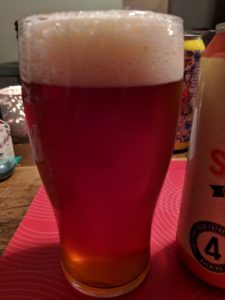 After looking at the Starter for so long I did have to dive in and take a sip, and I was quite impressed.  I have taken a shining to the Session IPAs because you get the kick of flavor of a normal IPA, but the alcohol concentration is much less, allowing you to enjoy it and not worry about being kicked in the stomach by high alcohol beer.  Over the flavour pallet, you have hints of caramel, with the fruit profile that out expect from a IPA, then the onrush of hops.  Reading other people’s reviews online, some have had hints of pine and floral finishes, I personally didn’t get that, but you will have to try for yourself now wont you.   Overall the taste was really good start to finish.  Like a snowy Owl in the middle of winter, it was brisk and beautiful.

Overall, I really did enjoy the Starter Session IPA.  Like I mentioned earlier, I am a Session fan, and this one is right up there with the best.  It is really nice to see all the new breweries and supporting Ontario Craft Brewers.   Next time you are at the LCBO, or even travelling the wonderful province we live in, just google and see what breweries are local and or close.  Stop in, say hi, and try away.  You will be pleasantly surprised on what there is out there.

Would you recommend this to a friend:  For sure I would, one of the better Session beers I’ve had.

Would you buy a case of it:  Does a bear poo in the woods?

Was the beer hoppy:  Yup, but not crazy like some of the IPA’s out there.