October 3rd, 2017 by Tyler in Everything, Links

What is the worst that can happen with a race that starts at 2pm and finishes at 10pm.  The answer nothing, nothing bad can happen, everything that happens over the course of that 8hrs is positive and fun!

Parry Sound Bikes, and Get outdoors Parry Sound hosted their second annual 8hr race at the Georgian Nordic Centre, about 10-15min outside of Parry Sound.  Now if you have never ridden at the Nordic Centre, I will 100% recommend you make the trip up there.  The trails are an absolute riot.  Not only the 6.5km loop that the 8hr race consisted of, but the abundance of other trails in their network.  Google them, or contact the lovely folks at Parry Sound Bikes for more information.

Now there was a race to talk about too.

With the format, start at 2pm, finish at 10, you need lights for the last 3hrs for sure.  It’s amazing how dark it gets at night, and how fast it becomes dark too.

With darkness comes cold temperatures as well.  I’m not sure what the final low was, but on my Garmin GPS, I did see 5.4 degrees C.  If you are sitting there in your warm office, or comfy couch, thinking 5.4 isn’t that bad, you should have dressed for it, well my good friend, it was cold, and add-on the heavy dew that was coming in as well.

From our happy little group, there was Tyler, Ryan, Dan and Sarah, all of which were in the solo category.  Cause really, why not ride for 8hrs, again, what is the worst that can happen. 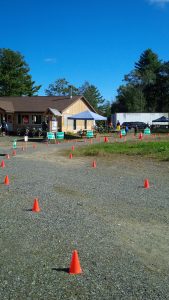 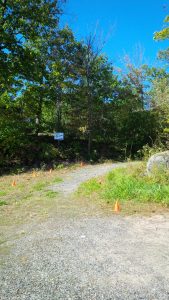 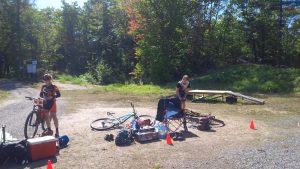 To give you a bit of an explanation of the course itself, I can sum it up as, the best 8hr course I have ever ridden on.  There was a mix of single track, technical rock sections, and just enough double track to allow you to relax, gather your thoughts, and drink!  Right off the hop, you hit the first single track which is a large rock slab off camber and down a slope.  That gives you the idea of how this lap is going to go.

As you ride along the rock single track, you are shot out onto some very fast double track.

Then as you are nicely into your rhythm, POW, single tack and more fun technical rocks and roots.  Now I will say the first 4 hrs the rocks were pretty good, but over the course of the day everything kept getting wetter and wetter, due to the rains that had happened the day before.  This was to become my downfall for sure, and I use the word fall as that is what I did.

One of the nice rock slabs that had been my friend for 4hrs, become my enemy and decided that my tires were too wet and that I needed to fall from grace.  So as I fell gracefully onto my side and slide down the rock, I decided to let out a nice umf and maybe the odd swear word.  Luckily no damage to the bike, only damage to my ego, and right knee.  Ryan and I pushed on, keeping the legs at a nice spin to ensure we had enough energy to push through into the night.

As the lap continued the knee was feeling the effects of a beautiful piece of Parry Sound rock, and began to twinge and pulse.  But as Ryan said, you have to push through the pain.   Again, luckily the double track was helpful in allowing the legs to spin freely, and just relax.

The first half of the laps were the toughest with technical features, rocks roots, etc.  The second half is where you found flow and got into an awesome rhythm.  Following Ryan through some single tracks, and then vice versa we kept going back and forth allowing each other some clear runs through the fun.

The one awesome part of this race was that it was small.  You had many many sections of trail with no one around and you could just putt along at your pace and not have to worry about being passed.  You were able to focus on what you were doing, which on this course was needed for sure.  You needed a sharp mind to navigate the rocks.

Lap after Lap, the start finish area was always alive, with either a fire going, music playing, the smell of delicious food being served in the ski building, people cheering you on, as they sat nicely beside the warm fire….

As the sun set, we had to mount up the lights at 7pm and boy were they needed, it got dark, and boy did it get cold.  The heavy dew set in, and you were not only fighting the cold and darkness, but also at times fog through the low areas. But again, having someone to ride with over the day and night made it way better for sure.

After 7hr and 12min of riding we had finished 13 laps, roughly 93km.  We were tossing the idea of one more lap around, but we had slowed down and the trails were becoming a little treacherous and decided to call it a day and enjoy some warmth and some food.

I must say, the bike does make a huge difference for sure.  The Marin Rift Zone Pro I was riding made my life a lot easier at times.  Was the right choice for me for sure!  Handled the rocks and roots, and was still fast to keep consistent laps.  Other than a broken chain, due to me not lubing it, there was no issues or anything bad to say.

Tyler and Ryan tied for Second with 13 laps

Dan forth with 9 laps.

All in all, this was an absolutely amazing event, and a huge thank you to the organizers, volunteers, the folks that made the food.

This will be on the calendar next year 100%, whether it is solo tag or 4 person, I’ll be sure to make the trek up again.

Photos above from Thom Morrissey Photography.  Photos are available for purchase.