24 Hours of Light – Through the eyes of a soloist

Yet again I decide to do a 24hr race solo. This time as many are aware was the 24hr of Light in Whitehorse Yukon. What made us decide to do this race, well it was a milestone year for many, turning 50, 55, 60 etc. So what better way to celebrate then heading up to Yukon to bike with friends. 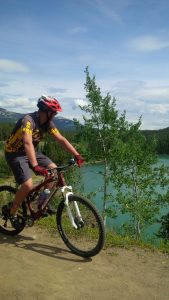 This story does go back a year when we were originally looking at going to moab but unfortunately that race had seen its demise. With the help of Keith, all eyes turned towards yukon. With this being Canada’s 150th birthday why not spend it here. The other positive thing was that there were bonus naked laps, we will get to those later trust me.

During the preride the day before most people seemed a little off whether It be cramping, or hungover. But alas, we were off for a great fire road climb. Not the start I was hoping for but hey it was manageable. After that climb there were more and more and more. I was beginning to worry, what did I get myself into. But again manageable so we chugged along. Well all the climbing was worth it when you came out onto a ridge overlooking Whitehorse. What a beautiful view we had. After spending some time admiring the scenery and the pile of bear poo beside the trail we began out decent. And what a decent it was. along the ridge with some right corners and a bit of stutter bumps.
The course wasn’t fully marked so we made due with what we could to piece everything together. Mindset was change the gears on the bike in preparation for climbing.

Race day preparations over, camp was set up, and everyone seemed ready to go. Even mother nature decided to drop rain on us for the first 3 hrs of the day. That didn’t dampen spirits though cause we were there to have a fun day on the trails.

Noon and we are off. Roughly 28 solo riders and numerous teams of 2,4 and 8 all off. Well I found it hard not to hold back, so I didn’t. I put down a pretty quick first 3 laps before being told I better slow down. So I did, well I tried my best to.  It is very hard to slow down when you are having so much fun. After about 4 hours on the bike and not keeping up on hydration leg cramping started. That was my body telling me to drink and don’t be an idiot.  It took about 2 laps to get everything sorted back out, but the legs were tired and we were only 1/3 through the day.
Luckily I was able to change the strategy a bit slow down and spin the legs out. Funny enough the lap times only dropped maybe 10 minutes which was kinda surprising. I got into my rhythm of which hills to walk, when to walk them and just pedal along.
I was passed a bit and passed a few people too which always boosts your confidence knowing you have done 7 or 8 laps and you still have enough juice in the legs to keep up to others.

Dusk hit and out on my lap, I was having a great conversation with a girl named Michelle who had moved to Whitehorse a few years ago. We chatted about this and that and she was slowly pulling away when all of a sudden yells bears!!! A mother black bear and 2 small Cubs had made their way to the trail where they nicely sat. Michelle got her bear spray out in case but lucky for us they lived off the trail. Seeing that was a great way to wake back up. So we decided it would be best to ride together for the rest of the lap. About 20 minutes goes by and that lovely ridge overlooking Whitehorse was home to a good sized grizzly bear. Who must have been spooked by another rider cause he was running the other way beside the trail. Two bear sightings on one lap was enough for me to take a bit of a break and collect my thoughts.

A couple laps later I came into the timing tent to see Johnny and Brendan there in the robes waiting for Bernie and Karen to come in. Time for some nudity. I was in contention for podium so what is the worst that could happen. Off goes the clothes and on the bike I go. Three naked guys ride into the forest. For those who don’t know if you rode a naked lap it would count as 2. So you would be stupid not to do it. Boy was it cold out though. Like probably the coldest it has ever been. Overall though riding naked through a bear infested forest is more fun than you think.  It was very freeing, and funny enough you didn’t realize you were naked after a while.   With only 1 off, and a bear spray bottle puncture to the leg the lap was over.  For a race where you were not allowed to use lights, many would it have been helpful that is for sure!  It did get really dark.

From there on out the sun did start to lighten everything up, and a few more laps I go.  The laps were getting slower, the legs began to feel like cinder blocks, and just overall exhaustion kicked in.  I took some time off the bike and we started looking at the leader board.  The top 3 riders we had separated from 4th place by 5 laps, so a podium was at hand.  The decision to do one more lap was made just to make sure that the position on the podium would be secured.  It was a fun lap, just enjoying the ride and overall experience.  Still keeping a lookout for bears and other wildlife.

I crossed the finish line with 16 laps completed, which equated to well over 4,500 meters of climbing.  I look back at the experience again and think, will I do a solo 24hr again, and that answer is yes I would.  But not for a couple of years.  There are many other races that I want to compete in and other events to try and have fun at.

At the end of the day I finished in 3rd place which was exactly what I had hoped to do when going to the Yukon, and that was to podium.

I want to thank all the support during the race, from Emily, Rachel, and everyone else with Team Van Go.  It was an experience that I will not forget that is for sure.