Well again it has been way too long since the last beer review, and I have some time so why not really.  For those new to team van go beer reviews, they really are very personal, and based on preference.  My best advice is to go out and try something different.  You may find something you like, or you may find something awful, but you will never know until you try it.  Once you find that perfect beer you will be hooked for sure. 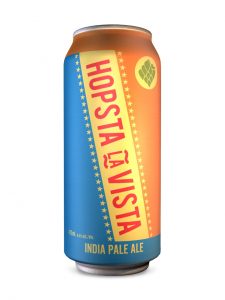 Now we move onto the main reason you are reading this… the beer!

As normal, we will look at the taste, appearance, and just overall goodness that is beer.

With the appearance, if you are classy enough to own a glass you can pour beer into you will see that the Hopsta La Vista pours with a dark golden colour.  Similar to a dark copper appearance.  You will also see a white head as well.

Now to the more important part of a beer and the part that will have the biggest impact on whether you will like it or not, which is the taste.  Now based on traditional IPA you would expect a good hit of hops, with an earthy flavouring.  The Hopsta la Vista beer doesn’t seem to go this route.  There is a slight hint of hop, but mainly the flavour you get is a malty and a caramel flavour.  So I would say this would be more on the mild side.  There is some very nice flavours to the beer for sure.

Overall the beer was pretty good.  It had a good taste to it, wasn’t as hoppy as expected, but overall at a nice cool temperature it went down very well.  Like mentioned earlier, go out and try some different beers.  You will find something you like for sure.

Would you buy this beer?  Yes I would.  Keep an eye out at your local LCBO and grab a can and give it a shot.

Was the beer hoppy?  Not really hoppy no, so if hops is not your thing, you may like this beer.

What is the translation of Hasta la Vista?  See you Later