A couple weeks back Jeff and I took part in a 3 day bikepacking tour of Central Ontario, following the route by Matt Kady (BT700 creator).   We decided to start and finish up in Haliburton at James and Savannahs cottage on Koshlong Lake.  Which was a perfect place to get the adventure started.

A little background, the COLT is a gravel and rail trail loop around central Ontario, hence the name Central Ontario Loop Trail.  It is a ride that you can follow turn by turn, or do what we did and made it a choose your own adventure.  We had end locations where we wanted to get to, Cambellford, Bancroft and Haliburton.  Having these as our goals made sure we stayed on track and on time.  That being said it made for some long days, but that is all part of the adventure.

Bike setup.  For me, I rode my new Marin Pine Mountain with all the bags on it from our Newfoundland ride.  The Revelate designs tail bag, front bag, gastank bag, and a Banjo Brothers frame bag which was perfect!  I was able to keep 3 bottles mounted on the bike with the frame bag.  The tent, chair, spare parts, food everything was on the bike. 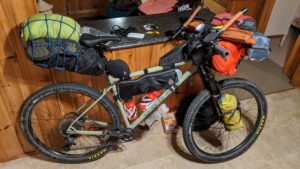 Jeff on the other hand picked up a trailer to pull. What a great idea, and the ease of packing, and storage was insane.  No extra weight on the bike, all was behind.    It was a Burley Coho XC trailer.  He also upgraded the wheel to something more for off roading.

As for the ride, we started out Thursday morning on the bikes by 8am setting off to the Haliburton County Rail Trail, and going south towards Kinmount and Fenlon Falls.  The weather was not great, with just mist and cool.  Made everything nice and damp to start the day.  Our first stop on the tour was Fenlon Falls at the Sobeys to stock up on food and water.  I grabbed a nice 1.5l bottle of water in which Jeff wouldn’t carry in his trailer.  So mean.  The section of trail between Haliburton and Fenlon Falls was pretty good, there were a couple sections that were a little soft, and not great for thinner tires, but the 2.6s on my bike had no problems at all.   Our next stop was going towards Peterborough.   This stretch of rail trail was amazing.  We got slightly lost in Lindsay but we found our way, and hit a No Frills in Peterborough.   From Peterborough we were going to make the push to Cambellford.  This was a push for sure.  Lucky for us the weather got better, the sun was out, not much of a breeze.  After a long 9+hr ride day and 180km we made it to Cambellford for a well deserved meal at a local diner, called Be My Guest.  The amount of food that was scarfed down was shocking, but very needed.   Oh it was sooooo good.  From there we had a short ride over to Ferris Provincial Park where we would sleep for the night… Well lack of sleep…  Provincial parks are great, but when a child is screaming bloody murder from 8:30pm thru to 2am, you don’t get much sleep… 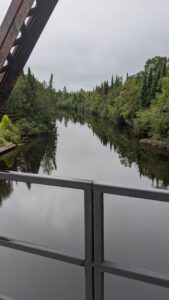 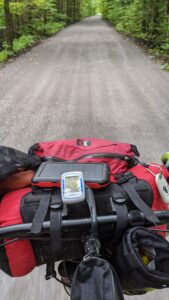 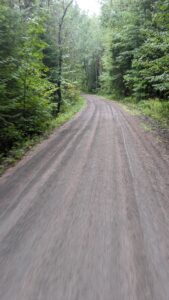 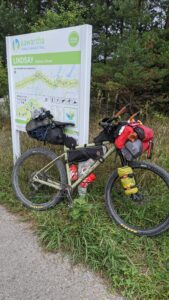 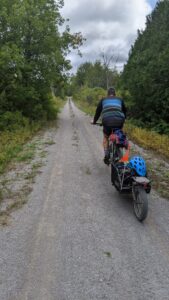 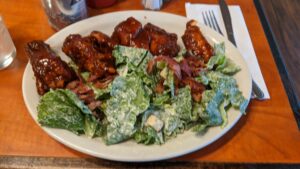 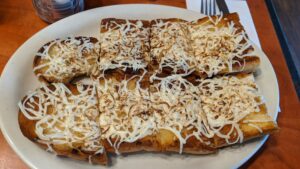 The next morning we woke up to a brisk morning.  We knew that the day would not be as long as the previous, but we did have around 120km to cover to get to Bancroft.  We started the day with a delicious Tim Hortons breakfast and coffee and away we went.  We decided to follow a quick country road for a bit before hitting the rail trail again.  We had a short section of rail trail before hitting the road to grab some supplies in Marmora.  This section is where we had a slight issue that almost derailled the whole ride.  Jeff hit a pot hole on the road which snapped the rear thru axle that holds the trailer to the bike.  After some much need cursing thinking, swearing, contimplating, choice profanity, Jeff ended up McGyvering the bike together to at least get to a hardware store to do a more permanent fix.  This detour and delay put us a bit behind schedule, which we looked at the map and decided to hit some beauty back roads to try and get to Bancroft as quick as we could.  I must say there are some amazing quiet roads in the area, and so many worth while trying.  Out last stint we decided to hit Hwy 62 to get to Bancroft around dinner.  The drivers that went by us, all were great giving us a tonnes of room!  We ended up getting to Bancroft around 6pm, just in time for dinner, which we were lucky enough to stay at Jeff and Karens place.  They gave us food, warm showers and allowed us to warm up our gear in preparation for the final day.  It is so nice to have a hot shower!! 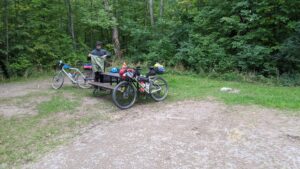 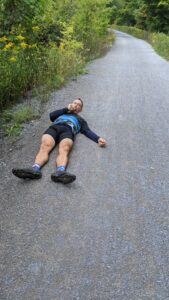 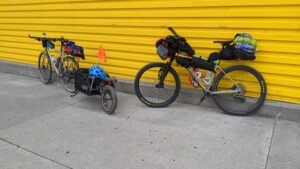 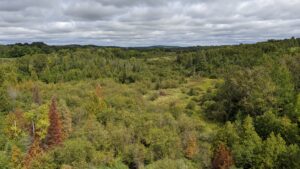 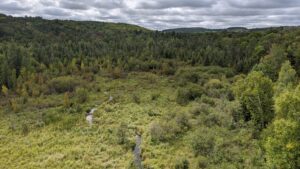 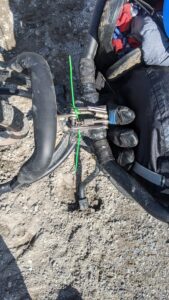 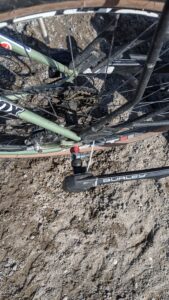 Day 3, the final tour back to Haliburton.  This would be our shortest ride day, covering around 100km.  We woke up to a brisk 2deg C temps, so we decided to wait a couple hours before hitting the road.  When we did it had warmed up to around 9C, and toured over to Tim Hortons again for the daily breakfast and coffee.  Looking at the map, we made a gameplan to ride some quiet back roads.  The only problem on this day, we didn’t have the same abundance of supplies, so we had to be sure to be prepared for 4hrs of riding before we could refuel.  We lucked out with the weather, a beautiful sunny day, and it did warm up nicely.  This day had some major climbs though, first coming out of Bancroft, and then a few between Bancroft and Haliburton.  Nothing that killed you, but they were long and just kept going and going and going.  But all the climbing was worth it coming back into Haliburton.  The downhill we got, wow!!!  When a sign says 9% grade downhill, you just let it go.  One thing I noticed with my setup was any speed above 50km/hr the bike decided to become unstable.  So for me I was limited a bit compared to Jeff who flew down the hills!  Haliburton on a Saturday is a busy place, but for us a great place to take a final break before the last 8km to the cottage.  The rail trail from Haliburton back to Koshlong was great.  All in all we finished just shy of 400km in the 3 days. 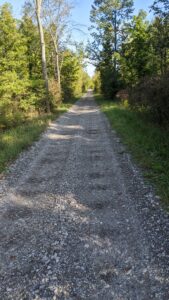 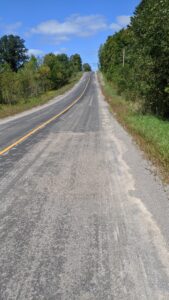 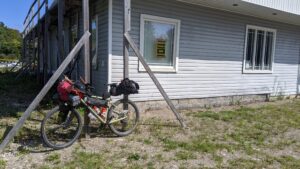 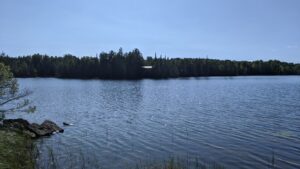 Some thoughts after the ride…. It was a great adventure, a lot of time to think and contimplate and just to forget about everything.  I need a new saddle, one more comfortable…. Pack a little lighter, there was a bunch of gear on the bike that was never used…. What will the next adventure be, BT700 for sure….. Would I ride with Jeff again, 100%!!!!!!….

Would I do this tour again, 100%, I may change it up, add a day possibly just to be more enjoyable, but all in all amazing tour.