Oh I was not kidding you when I said I had a few new beer reviews to pass along, and if I don’t do them now, I will forget, and that would be a crying shame.  On the other hand, that could mean I would just have to go out and re-drink them again…. I would not complain about that, or hey if breweries want to start sending out samples for us to review, I’d be all game for that as well!

Now recently, a friend told me about the LCBO app, where you can order whatever beer you want, and either have it delivered to your door, or to the local LCBO retail location, as long as you have a minimum order of 50$.   With that being said, you can really go out and try a vast array of Ontario Craft Breweries, like Walkerville Brewery based out of Windsor Ontario.  Now personally, I would not know when I would be down in Windsor, as it is a little outside of my commute, but using the app and having beer delivered to store, now allows us Central Ontarians the opportunity to expand our beer reaches. 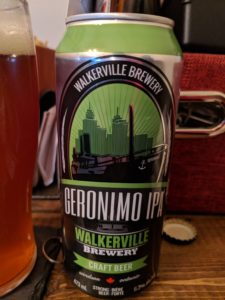 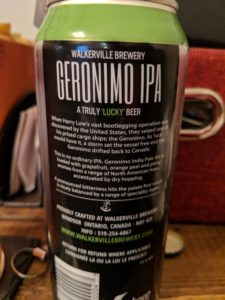 Welcome to the Walkerville Brewery. A place of heritage, community and of course – great hand crafted beer. Our history begins with Hiram Walker; a man better known as the founder of Hiram Walker and Sons LTD, the manufacturers of great spirits including the world famous Canadian Club.

Something many people don’t know is that Mr. Walker was also a beer man, and had a keen eye for the finer things in life. So when he opened the original Walkerville Brewery in 1890, he told the citizen-workers of his company-city that he would provide an ‘Honest Beer”. What he meant was anything produced from his brewery will only be crafted of the finest ingredients – no exceptions.

Over 120 years later, we brew our beer with the same ideology using unpasteurized single batches, no artificial preservatives, flavours or colour to provide beer lovers from Windsor to London with premium, fresh hand crafted brew.

Today’s Brewery operates in one of Mr. Walker’s original buildings known as “Surge Plant 16”. Once an overflow storage facility for the production of Whisky, this repurposed 18,000 square foot facility is now home to the finest beer produced in Essex County using traditional hand crafted methods, and of course, only the finest ingredients.

Cheers to you Hiram Walker, and to everyone who enjoys a fine hand crafted beer.

I was going to say without further ado, but I said that in the last beer review, so without further delay, let us take the magical journey into the land of Geronimo IPA’s review.  And yes more photos to help us with visuals!

While using these photos, we should start with the appearance of Geronimo IPA.  As you can tell it was poured into a glass, which shows us the clear in nature, copper and delicious colour.  My pour produced a nice White/beige head, which survived just as long as I waited to start drinking it.  There was plenty of carbonation, and the head did last a good amount of time. 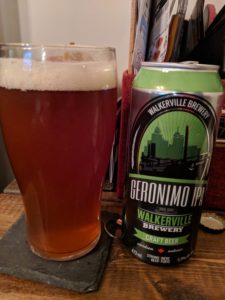 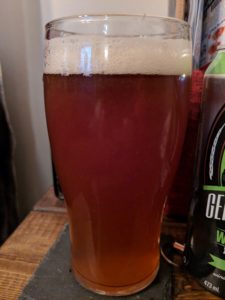 The sniff test revealed a good citrus and fruity tones with a hint of caramel is what I noticed.  Now that being said, I was on the precursor to having a cold, so my sniffer may not have been 100%, but if you want, grab a can of Geronimo IPA and try for yourself.

Now really the piece de resistance, the taste.  I would describe this as a Medium bodied beer, and by that I mean medium bodied…. In comparison, Light bodied, would be more of a light beer, full bodied more of a heavy dark beer.  Really more along the lines of the overall weight of the beer, if that makes sense.  With my mouthful, the initial taste I got was more on the maltiness, with the hops coming in a close second.  Like a typical IPA you did get a good hit of citrus / grapefruit and really an overall crisp taste.  The crisp would be due to the carbonation, which I really did enjoy.  All in all this is a very strong IPA, not strong in the sense of taste, but in comparison to other IPA’s I’ve had.

So overall, the Geronimo IPA is a solid IPA, I would say one of the better ones I’ve had for sure.  This would be one that if you see in the LCBO or in the Windsor area to check out for sure.

Would you recommend this beer to a friend:  Yeah for sure, with a rating at 4.39, that should be a given!

Would you buy a case of this beer:  Yup, for sure again.  Not really sure why I ask myself these questions…

Was the beer hoppy:  In typical IPA fashion, yes it was.